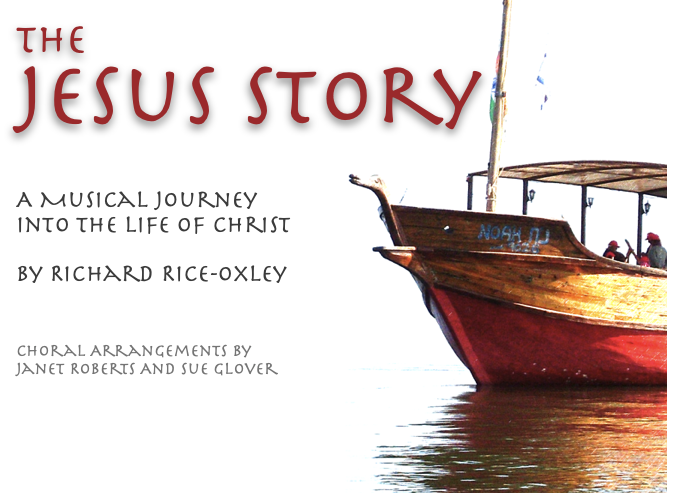 Awesome!
That’s how we could truly describe Jesus Christ.

For two thousand years he has been a central figure in the history of our planet. Today over 2 billion people would call themselves Christians.

But who was Jesus Christ?
What did he say?
What did he do?
Why is his death important?
Why do people say he’s still alive?

Let us discover the answer through the songs of The Jesus Story. They were recorded at the performance on 19th April 2015 at Corby Glen.

Jesus was born a Jew, a member of an oppressed people. At that time Rome ruled the world, and the Jews were part of the Roman Empire.

But they hadn’t lost hope that one day someone would come to set them free.

A new day would dawn. Dayspring!

Jesus was born at Christmas.

Christmas! Is it magic or mayhem?

Most of us, young and old, enjoy the excitement of this season.

Our singing of Christmas Carols enhances the goodwill and joy of this special time.

Some carols are lullabies sung to the new babe of Bethlehem. Others help us to understand something of the meaning of his birth.

The next two songs tell the story of how baby Jesus was visited by the angels, the shepherds and the wise men.

The Baptism of Jesus

We don’t know much about the growing up years of Jesus.

We do know that he grew up as the son of Mary and Joseph, the carpenter.

He was an adult when his baptism took place.

Baptism or Christening marks the beginning of the Christian life and today children and adults are welcomed into the family of the Church when they are baptised.

For Jesus, his baptism marked the beginning of his work of teaching and healing as the Son of God.

In our next song, Jesus hears the voice of God speaking to him from Heaven:

The Time in the Wilderness

What Sort of Saviour?

Jesus was a man with a mission.

But before he began, he took time out to pray and to work out his approach.

In the wilderness he rejected the wrong path, suggested by the devil.

Forty days without food is no joke, but at the end of his fast Jesus knew the way he had to follow – the Way of Love.

In the song ‘What Sort of Saviour?’ the words of Jesus are sung by a soloist and the choir represent the words of the devil.

The Teaching of Jesus

The Gospels give us much of the teaching of Jesus.

The next song is based on a famous passage in the gospels called the Beatitudes.

These teachings were given by Christ, and they point us to those whose lives show the blessing of God.

Some of these sayings may be familiar to you. For example: ‘How blest are those whose spirits are open to God, for the kingdom of heaven belongs to them’.

Jesus often used stories, called parables, to get across his message.

Some of them are very funny, with pictures from everyday life. Others, we find more difficult to understand because Jesus was trying to make his listeners think.

The next song is based on the parable of The Lost Son, known to many of us as The Prodigal Son. In this story, we see loving parents who long for the return of their wilful, selfish child.

Jesus is showing us a picture of a caring and loving God, who offers forgiveness to his children.

The Miracles of Jesus

The Sea of Galilee

The extra-ordinary spiritual power of Jesus was demonstrated by his miracles.

The next song paints a musical picture of Jesus calming a storm on Lake Galilee. It starts off really calm and slow and gets louder and faster as the storm reaches its climax.

The Healing of Ten Men

Next is a song about the healing of ten men who had leprosy. Ten were cured but only one came back to say thank you.

The Entry into Jerusalem

After three years of teaching, preaching and healing, Jesus came to the capital, Jerusalem.

His popularity and his fame had grown over the years, and he was given a rapturous welcome by the people.

He chose to enter the city, humbly on a donkey, to show that, although he was a king, he didn’t need a warhorse and an army.

He came in peace.

The ministry of Jesus was hugely popular with ordinary people. But many of the religious leaders took offence at it.

For one thing, he associated freely with people whom they considered to be unacceptable, such as prostitutes, and tax collectors for the hated Romans. And he was scathing in his criticism of their spiritual leadership.

He also made spiritual claims for himself which outraged them – for example, to have authority to forgive sins and to add to the law of Moses.

Finally, by riding into Jerusalem and accepting the applause of the crowd, he was claiming to be the long-awaited King of the Jews. This claim they saw as blasphemous and politically dangerous.

Jesus had to go!

Jesus came to Jerusalem knowing that he was going to be killed.

He also knew that his death would carry a huge spiritual importance.

It was the time of the Passover Festival when the Jewish people remembered their miraculous escape from slavery in Egypt.

Jesus celebrated the Passover with his disciples, but gave it new meaning by linking it with his imminent death on the cross.

During the Last Supper Jesus spent time reassuring his disciples that despite his death and physical departure from them, he would leave them his presence through the Holy Spirit.

When the supper was ended, Jesus took Peter, James and John to an olive grove called Gethsemane.

Knowing the awful death that awaited him, Jesus suffered a time of agonising prayer.

The song ‘The Moon Shines’ portrays the loneliness of Jesus as he struggles to come to terms with what he has to do.

It was shortly after this that he was betrayed by Judas’s kiss.

Jesus was arrested and taken to the High Priest’s house.

All the disciples deserted him, but Peter and John followed and gained access to the High Priest’s courtyard.

Peter had boasted that he would never deny his Lord, but Jesus had predicted that before a cock crowed he would deny him three times.

Lord, What Have They Done?

Jesus was put on trial before the religious leaders.

The High Priest asked him if he was the Messiah, the Son of God. When Jesus said I am, the whole Council condemned him to death.

As they did not have the authority to execute the sentence, they brought him to Pilate, the Roman Governor. They accused Jesus of being a threat to Roman rule.

Pilate was not convinced but, swayed by the crowd, agreed that the death sentence should be carried out.

Jesus was to be crucified.

The song ‘Lord, What Have They Done?’ imagines someone looking at Jesus on the cross and thinking “What a waste”. The third verse, which you’ll hear sung as a duet, gives the reply of Jesus.

Everybody thought that Good Friday was the end of Jesus.

But on the following Sunday something wonderful happened – God raised Jesus from the dead.

Over the next few weeks he appeared to his family and friends on a number of occasions.

The next song, Hallelujah, celebrates the risen Christ.

The song ‘We See Christ’ reflects on the life, death and resurrection of Jesus Christ.

It invites us to experience his living presence as we journey through life.

Christians believe that Jesus Christ has rescued us from the power of sin and promised to be with us always.

He still feeds the hungry and heals the lame through those who follow his example.