I began writing songs in the early 1970s, soon after I was ordained as a Church of England minister, as an expression of my faith.

My first appointment was to be curate in Eastwood parish.  This was a spiritually uplifting time, and in the spring and summer of 1972 I was inspired by God to write a number of songs.  One of them was The Sea of Galilee. I found myself playing on my guitar two chords, and was fascinated with them. As I played them over and over again, they suggested the sea.  Composing a song about Jesus’s Stilling of the Storm just followed on naturally.  This photo of The Sea of Galilee was taken by Sylvia as part of  her pre-ordination  training in 2008. 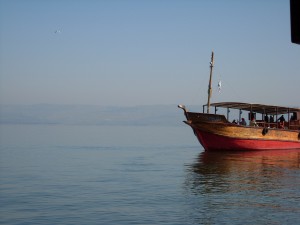 In 1973, I became Youth Adviser for The Church Missionary Society (now The Church Mission Society) and was based at the Headquarters in Waterloo Road, London. The setting of The Beatitudes was composed during a group trip to Taize, a monastic community in the south of France which attracts young people from all over the world.  The community emphasises both social action and personal holiness, a combination we find in these words of Jesus.  Originally set to the New English Bible version, the current translation is now largely my own attempt to convey the meaning of the original.

Dayspring was written in 1977 for a song competition connected with a big youth event at St David’s in Wales.  I didn’t win, but the song has remained a favourite, and has often been sung in parishes I have served. 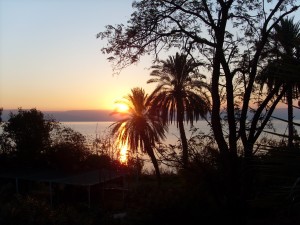 Whilst we were at the Church of St Matthew and St Luke, Darlington, I recorded all the songs I had written up to that point with the help of Simeon Hope. Some of the songs were sung in aid of a Charity. In 2008, the songs were kindly transferred from cassette to CD by Antoine Robinson.

The idea of collecting together songs I had written about the Life of Jesus came towards the end of 2010. Soon afterwards I had a dream in which someone was singing a pop song. When I woke up, I got my guitar and played the tune I had heard in my dream. I changed the words to Hosanna, as I needed a song to cover Palm Sunday!

In March 2011, I joined forces with the kids from the local Primary School in Aldbrough, East Yorkshire, one of the parishes where Sylvia was serving as minister. I was retired by this time, but helping in the Benefice. We made a CD, recorded in Aldbrough Church, which had 18 songs from The Jesus Story. The whole musical contains 24 songs, of which 18 were chosen to be sung at the performances in Corby Glen and Swayfield, Lincolnshire in 2015. At the end of 2011, I composed Here is Love for Christmas which was sung by the Choir of the Aldbrough Benefice Churches. This is perhaps my favourite of all the songs. In 2012 I set about filling in the gaps in the narrative and wrote some new songs, for example the Healing of the Ten Men and Peter’s Denial.

I compose to the guitar and do not write down music.  I was helped in this by Julian Watson who kindly transcribed the musical between August 2012 and April 2013.  For a year I tried hard to get The Jesus Story published or performed, helped by Sylvia.   But despite a lot of effort (and prayer!) nothing happened.  Then in the summer of 2014 Sue Glover and Janet Roberts agreed to take on the project.  They did all the choral arrangements between them and produced the score.  They also recruited the choir and band members from the local area.   We had generous financial support from my friend Vic Wood who had been encouraging us during the difficult period. 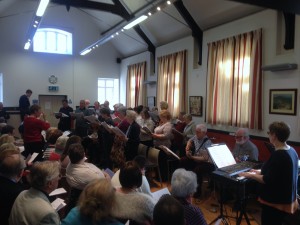 The musical, which includes a linking narration, received its first performances on Friday April 17th in Swayfield Village Hall and Sunday April 19th in Corby Glen Church Street Rooms under the direction of Janet Roberts. Sue Glover produced all the publicity. The performances were received with great enthusiasm, scrumptious refreshments enjoyed, and we thank God.